If you follow my Facebook Page you’ll probably know that I’ve finally bitten the bullet and applied for French nationality. Will I one day really “become” French once granted this highly coveted passeport?

I don’t want to “be” French. Don’t get the wrong idea. I’m extremely grateful to my adopted city, my love for France is unquestionable, that of les francais occasionally less so, however, that has nothing to do with the above statement. It’s just that I could never be anything other than what I am: a Canadian by birth, a citizen of the world by choice. So yes, I will be a little more French if award a liberté-égalité-fraternité passport, though above all, it will give me greater freedom to be that citizen of the world.

I won’t go through the minute details of the process of applying for citizenship (Heather Stimmler-Hall of Secrets of Paris did a thorough outline here), but for me it equated to the following figures:

Despite this last point, most everyone I know who’s gone through the application says they will come back requesting other mysterious paperwork. This usually happens at the Préfecture when applying for residence permits as well so I’m prepared for the drill. 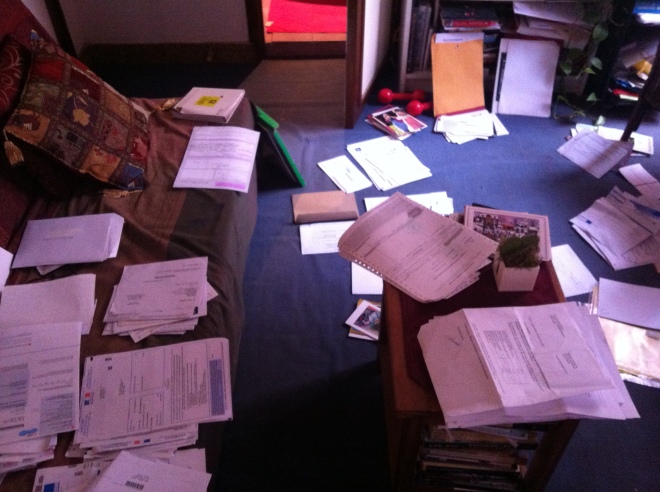 Paperwork. That was one of the dreaded reasons for my stalling. I would have to open … the closet. Almost 15 years of bank statements, invoices, social security forms, tax receipts and piles and piles of papers. Sure, I could have merely squinted my eyes and dug around for the few papers that were still missing (I really had pulled together half of the application 3 years ago), but I then thought I had to make room for my new dual life as une franco-canadienne so I took a deep breath and started removing everything.

If you’ve read my book, or have known me for a while, you know that I used to teach English. I stopped about 6 years ago. As most English teachers can attest, we love coming across and saving for reuse a great exercise, grammar sheet, vocab list etc. and habit accentuated by my pack rat nature. I’d hung on to almost everything up to about 2 years after my last class, at which time I significantly downsized the paper forest planted in my closet. Uprooting the piles of books and binders I not only uncovered the remaining stacks of old handouts… I also came across other surprising treasures: an unwrapped Christmas present (I can’t remember whom it was meant for though it’s perfect timing with the holidays coming up), a handwritten poem in Spanish by a certain “Carlos” (memory a little foggy as to who “Carlos” was…), a child’s drawing about a certain Mr Happy (unsigned), dozens of art exhibit, travel and nightclub flyers from as far back as 2002 (!), a guide to Windows 98 (which I can’t imagine ever opening), a videocam for a very old laptop (!), numerous cassette tapes, VHS videos … and computer disks (remember those, the little hard squarish ones?) and a very entertaining series of old ID photos which I’d have to get for those old residence cards and récipisses the latter inspiring this fun spread (the first photo is from 2002!).

Hours of sorting and dodging towers of papers most of which ended up in my building’s large green recycling bin, practically filling it half way. If I was really “becoming” French I might have thrown it all straight in the garbage instead, proof my eco-friendly Canadian-ness can’t be shaken. That said I’ll never give up my French art de vivre, as obvious with my champagne drinking, fancy boat touring on the Seine from the photo at the top. Cohabitation it will be … well hopefully, my application needs to be accepted, look out for an update in approximately two years! Wish me luck and look out for other fun posts about “becoming” French.

Discover the new Beaupassage, a refurbished historic passageway now home to a refined collection of restaurants, cafés and food shops by Paris’ top chefs (for Frommer’s).