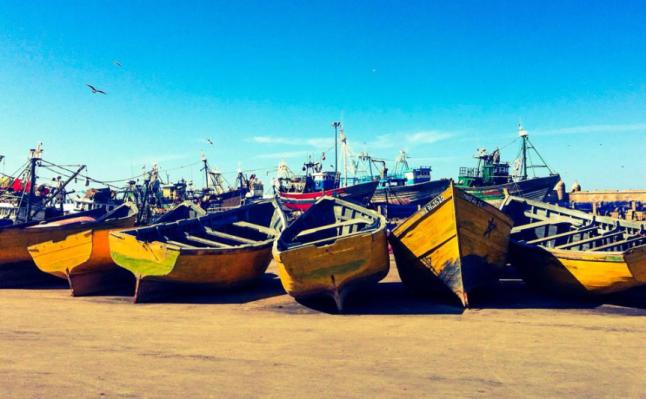 I’d first visited Morocco two years ago to attend a trade fair in Marrakech for work. I stayed on afterwards and was marched at a speedy pace all over the city by a friend of a friend (more on that in another post). Since that time I’d virtually seen every nook and cranny of the city (and there are many!), I decided to see a little more of the country this trip back. The city of Fez was high on my mental list, however, it seemed a complicated and lengthy option. What was “nearby” Marrakech?

In my research the seaside town of Essaouira came up often as a good day-trip. From a quick look at some photos online, I was sold, it looked gorgeous. I could bare getting up early for once, couldn’t I? At 8:00 AM the morning after I’d arrived, off I was scootered by the excursion company’s messenger through the maze of the Marrakech Medina. Essaouira was not our first stop, I was dropped off at a sort of depot. I was dying for some caffeine and wouldn’t have minded some food, but our attendant sent me onto a minivan and said we’d be leaving in 5 minutes. Forty-five minutes later we finally departed.

Oddly enough, there were two British guys in the group who’d dined at the same night kitchen “restaurant” as me the previous evening. Sitting beside me was a friendly older Australian woman who I got chatting to after the coffee at our pitstop igniting my under-rested brain. Since we were both single-travelers, upon arriving in Essaouira we ended up wandering around together. It was nice to have company but she was also a semi-shield from some of the street harassment my blond hair grants (only some of it, that day I was asked three times to have photos taken like with this fish seller above).

As we got off our rickety minivan we were instantly blasted with the refreshing sea breeze, I knew it had been worth the early wake up call and the rocky ride. Venturing inside the medieval city walls, the city’s lovely lanes, whitewashed houses, colorful doors were casting a spell on me. What a peaceful oasis compared to its dirty, noisy big sister city Marrakech. While the latter does have its charms, I fell hard for Essaouira.

After touring the port, line with fishing boats and boat building workshops, we slowly ambling along the main historic street, taking in the curiosities: rows of handcrafted shoes, vibrant knitted hats, exotic spices and knick-knacks galore. We then snaked our way through some of the narrow side-streets, each one getting smaller and smaller. We eventually found our way to a passage up to the solid, stone ramparts offering gorgeous views of the Atlantic and even more of that invigorating breeze.

After it seemed like we toured most of the center, the Aussie and I settled on a lovely rooftop terrace for lunch, far enough from the main tourist traps. We had an enjoyable meal, serenaded by the breaking waves and seagull calls. I’d chosen to take a day trip just as much to see a new place as I had to relax and it was nice to do both combined. No rushing about, no internet, no phone calls, no endless lists of to-dos.

We eventually pushed on, thinking we could take another stroll along the port, when we turn a corner and stumbled upon the “real” souk. Aha! So here’s where the locals actually do their shopping. And just then the call for prayer came bellowing out, whisking us up into the moment that much more (see video below… you can even hear that amazing wind!). We snail-paced along passing overflowing carts, customers haggling over prices, old ladies gossiping. We even passed the British guys, laden with market purchases. “Christmas presents!” one of them cheerfully replied to our smiles at their bags. “It’s much cheaper here than in Marrakech,” he declared. Another reason to love Essaouira, though my small stuffed carry-on couldn’t fit too many goodies. I’d just have to come back, next time for longer than a day … and with an empty suitcase.

A detailed itinerary including romantic places, bars, restaurants for a wonderful romantic weekend in the City of Love.