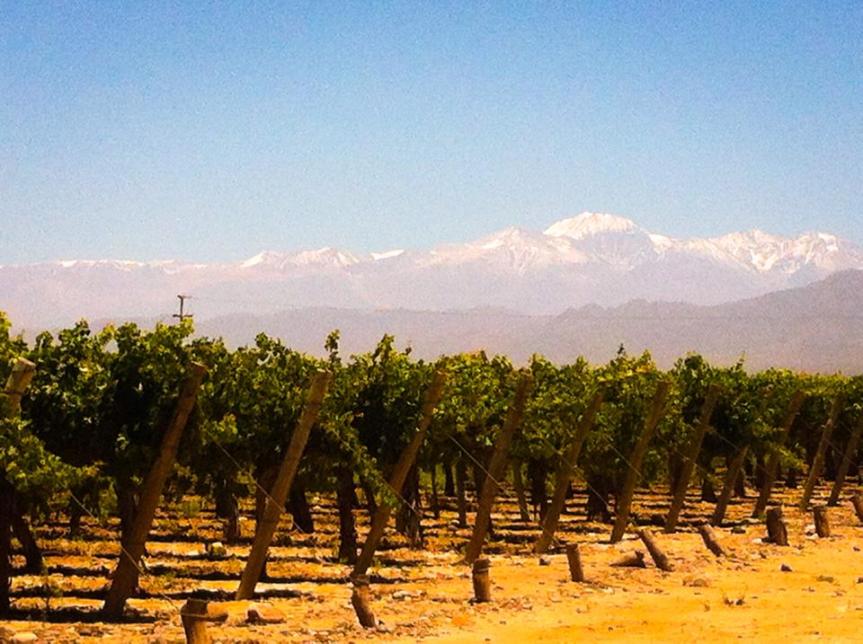 The second destination my brother and I were on the same page was Mendoza, the name of both the region and capital city of this western area of the country; an expansive plain blanketed by grape vines, olive trees and shadowed by the awesome Andes. How could we not go… and be wowed?

We’d originally planned on doing a bit of a road trip to get there, stopping in Cordoba along the way to break up the 1200 km between Mendoza and the capital. Are plans crumbled when we tried booking a car about a week from the day only to find absolutely no rental cars available in the whole city, really?? Well, we didn’t try those small suspicious agencies, but all of the main ones were no way José. The 16-hour bus ride was really out of the question, both of us being beyond the backpacker stage of our lives. The lovely owner of the apartment I’m renting had kindly offered us to come and stay with her next to the beach in a renovated bus, so at least we had a eccentric plan B. However, I’d already booked the hotels in Mendoza so we kind of had to get there… Luckily, we found a rental car available in Mendoza and a decent flight… so off we went in search of the grape and possibly a little holiday spirit.

Our first day was spent exploring town. Since it is one of the largest cities in the country, I’d expected to find a similar hustle and bustle to Buenos Aires, just down a notch or two. Au contraire. Mendoza had the feeling of a big small town, a welcome break from the honking horns and exhaust of the capital federal. We stroll its shady, quiet streets, enjoyed empanadas and cervezas on sidewalk terraces while taking in the local ambience. The Brazilians and us, that is. For it was here that we first started noticing that the greatest number of visitors to Argentina seemed to be from their powerful and numerous neighbors to the north. Proximity certainly drew them, as well as an apparent mutual love of wine! This got me thinking, do they even make wine in Brazil? Where these visitors actually wine refugees? A little research taught me that some wine is in fact produced in the South of Brazil, close to Uruguay and therefore not too far from Argentina, though they seemed to be quite fond of the Mendoza Malbec.

Malbec. The grape varietal most associated with Argentina, deep in body and color. While I am rather a French wine snob, of new world wines, I’ve always given a congratulatory nod to Argentina’s vintages. One of the goals of my whole trip was to get to know them better and Mendoza was definitely the best place for this.

On day two we decided to check out one of the neighboring wine towns, mainly to get the above objective rolling, however the town we chose had an additional advantage, it was also the land of olive groves. We highly deserved sinking our teeth into the first ones we tried, having spent an hour getting lost in the “suburbs” of Maipú amist recycling depots and car repair garages, not the delicate rows of vines and olive trees, we’d been expecting! Serves us right for not getting GPS, though we did fare not too poorly considering.

Pulling into the small parking lot of Miguel Simone’s olive farm, I knew we were entering a special, sensorial paradise. There, outside the front door was standing Señor Miguel, almost as if he were waiting for us (well, he was probably about to leave for lunch seeing as our meander through the rundown parts of Maipú had gotten us there a mere 15 minutes before the scheduled lunch closer). Podemos hacer una degustación? I managed in my weak Spain. Si, claro. Whew, we’d just made it.

I couldn’t decide what I loved more: Señor Miguel or his olives. He gave us a generous tasting of four of his different oils along with green and black olives. Ten years prior, el Señor had retired from his career in banking to start up his farm. Now that’s what I call a perfect retirement. Olive trees will absolutely be a feature at my retirement villa. With distinguished poise he described his different wares. We took a risk and bought several bottles of oil hoping we’d be able to bring it on the plane (surprisingly without a problem) and a huge jug of olives, those we were certain to mostly consume during the rest of the week. I was sad to say goodbye to Miguel and have put him on my list of grandpas to adopt me.

On our way out, I scooped up a better area tourist map sitting on his counter so we could see what might be open over lunch for a wine tasting. We took a look around town to get back to one of the largest producers in Maipú: Bodega Lopez. Though I usually prefer smaller producers, it was good to sample both as we’d probably only be able to purchase the larger companies abroad. Historic Bodega Lopez, dating back to 1898, was actually mid-sized, a surprising fact from looking at their fancy tasting room and facilities, plus it was interesting to learn that most of their most of their sales were to the Argentine market. Off we went on the next tour, which was only in Spanish, I’d been on so many winery tours, I knew the routine, but each time I do learn new things and local specificities. The wine was rather pleasant so we picked up a few bottles plus some of their “champaña” for Christmas.

The next day we headed out to another nearby town, Chacras de Coria, where we’d spend a few days over Christmas. We’d figured that since many places would be closed on Dec 24 and/or 25th that we might as well be staying at a nice place over those days. Once I’d read the reviews for the Posada del Encuentro, describing the friendly family vibe and cozy atmosphere, we knew this was for us. It did not disappoint, I’d been writing them in advance and scored us an upgrade to a suite, it might have been the best room with it’s small private terrace facing the pool, that bottle of Bodega Lopez was at home there too!

That afternoon we took a hot walk to a nice winery that was on the other side of town, the Clos de Chacras. We had a lovely tasting on their charming patio before the tour. An upmarket venue, the wines were meant to be aged, They wouldn’t get a chance to with us so I picked up at 2011 at least a tiny bit older, it could be the big sister to the Bodega Lopez.

Since we couldn’t do any tastings on the 25th we decided to take a drive up into the mountains. We’d been admiring them from afar, it was time to get a little closer. Up we drive on the small highway 7, the snowing peaks getting a little closer but far from within reach. We took a little wander down a backroad scattered with little holiday cabins… and locals picnicking by the side of the road. More on the mountains in my next post.

Back at the Posada we settled in next to the pool with most of the other guests, becoming a large international family including other Canadians a Danish-Japanese couple with their adorable triple-citizened daughter (they lived in Brazil), a couple from Bermuda, and the Posada owners’ cousins from Argentine city of Cordoba. We shared laughs, wine, cerveza, turron I’d brought from Spain and the each tried a few sips of the cousins’ mate.

On our last day amongst the vines we made it to two other wineries. The first was another well-established venue, Nieto Senetiner, though a little on the showy side and by far the biggest of the ones we visited. We’d actually already seen it on supermarket shelves back in Buenos Aires. The tour and tasting take place at their historic bodega from 1888 where they make their best wines, their mass-market range produced in an industrial facility tucked away in the more distant fields. 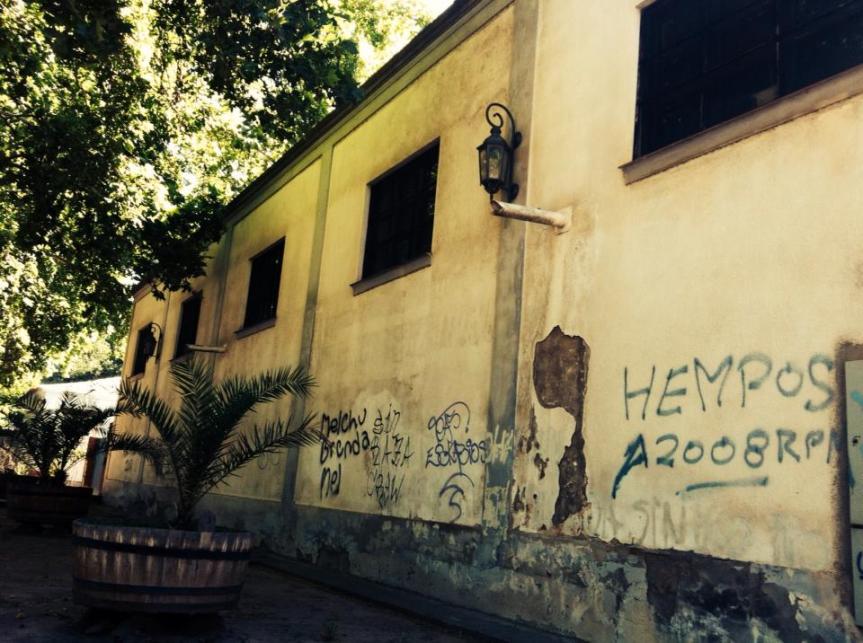 The second on the day was probably my favorite of the four we visited. Back at the Posada, several other guests had gone to a certain Carmelo Patti, the name had a special ring to it, plus with their smiles and rave reviews, I knew I wanted to go. His approximate location had been x-ed on our map, on what looked like a main road. It shouldn’t be too hard to find. As we advanced up the road I got my brother to slow down around where the x was. All the other wineries had signs. Nothing here. Maybe he was on a side street? I turned on my phone data to track down his exact address. Still, when we drove back down the road, nothing. Where the heck was he? I could tell my brother was getting impatient and would rather be sitting by the pool with his cerveza so we only had one more chance. Looping back around, I spotted an indescript, graffiti tagged wall and a small dirt lane next to it. Could that be it??

Creeping down the lane we see a warehouse like building with some men chitchatting out front. Estamos a Carmelo Patti? I asked. Si, and they gestured towards a room. Car parked, we shyly walked up to the door where we found the charismatic Carmelo enthusiastically explaining his vintages to a Brazilian family. In Spanish. We offered us a glass and we became part of the small informal group. Carmelo is one of those winemakers who lives and breathes his art, evident in his passion and unique wines. Around the tiny tasting room where numerous accolades, prized and dusty binders filled with press, the New York Times and Robert Parker had also managed to find the gate through to Carmelo’s world. This recognition is well-deserved, though I’m glad Carmelo’s sticking to his principles, concentrating on the wine and not turning into a celebrity, however, he’s so loveable, I can see why people from all over the world come in search of him. I hope to be back and maybe to have another adoptive Argentine grandpa, a good pair to Señor Miguel.

As we ease into the second half of the summer, I keep hearing about “staycations,” due to the economic situation it even appears that…