There are hundreds of fabulous romantic places in Paris and each arrondissement of the city has its own treasures. In this new series I’m gathering up my favorite romantic places per district to make it easy for you to find the perfect romantic stroll, drink, bite to eat or secret cuddle. Have some other romantic spots in Paris you’d like to recommend? Feel free to add them to the comments below! 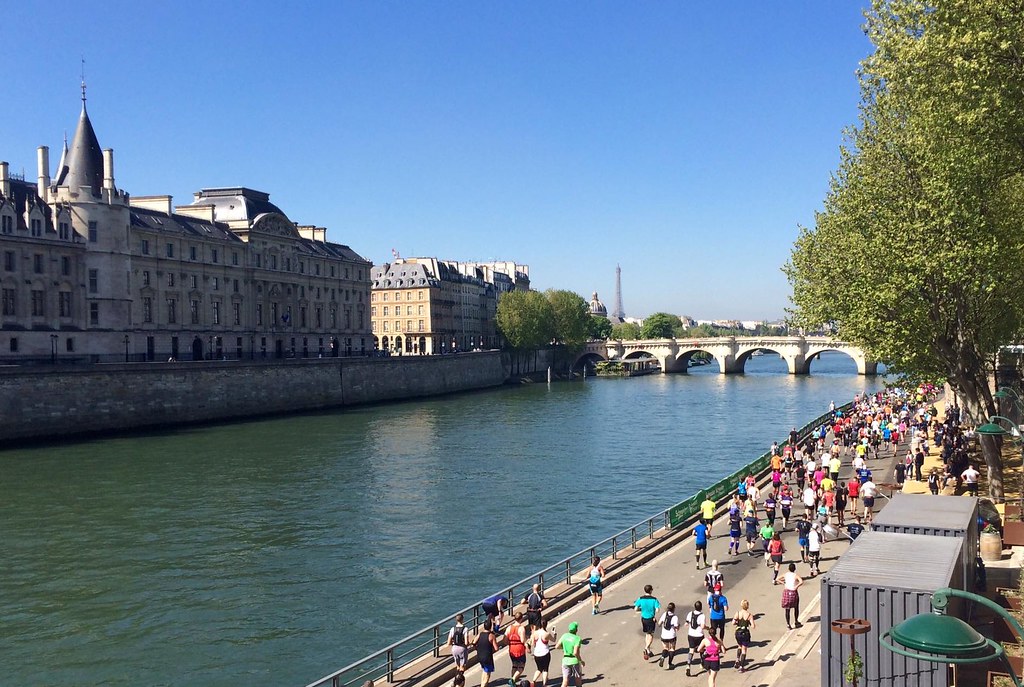 The saying that you can see the Eiffel Tower from everywhere in the city, it’s always a nice surprise when it pops into view. A charming angle of it, along with the Conciergerie, the Seine and the Pont Neuf bridge can be admired on the corner of the Pont du Change, the bridge that connects the Place du Chalet over to the Ile-de-la-Cité. It’s the perfect place in the 1st arrondissement, night or day, for a lingering embrace with your chéri/e.

Just next to the above you, on the right of the ground floor of the Chatêlet Theatre, is the sensual historic café Le Zimmer. Opened in 1896 during the great boom of Parisian brasseries in the Belle Epoque, the attractive interior includes wood paneling, painted ceilings, plush velour curtains and seductive low lighting. It’s a great place for a romantic coffee break or a reasonably priced lunch menus at 22 euros (and there’s even one for vegetarians). 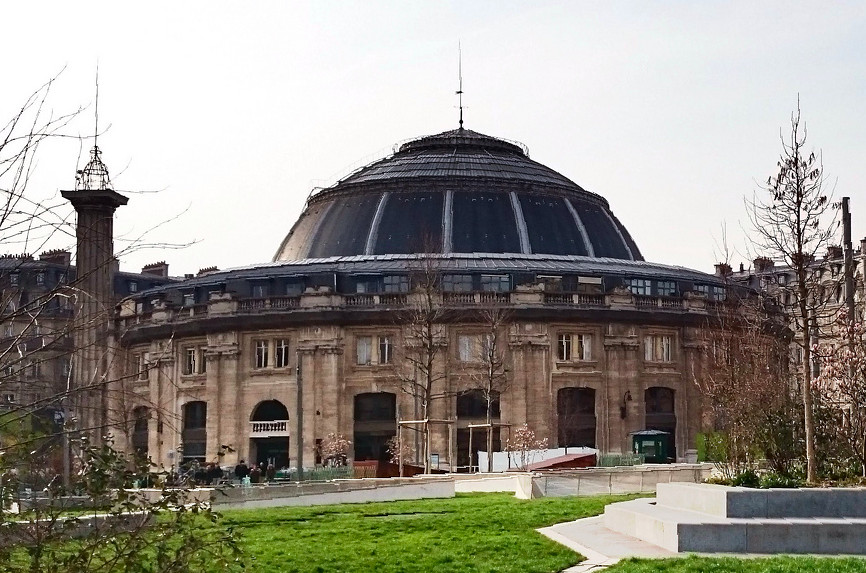 Rising behind the dome of the Bourse de Commerce building and overlooked by the busy pedestrians crossing through the park behind Les Halles, is this tower of many intrigues. A palace formerly occupied this land, the Hôtel de Soissons, which was inhabited by Queen Catherine de Medici after her husband King Henri II’s premature death. The Queen was highly interested in the occult, having had Nostradamus previously work for her who had predicted her husband’s gruesome death. She had the 28-meter-high column built in 1575 as a the lookout point for her astrologers, including Cosimo Ruggieri. While you can’t climb its 145 steps, you can gaze up at it and see her royal couple’s emblem of an intertwined H and C. 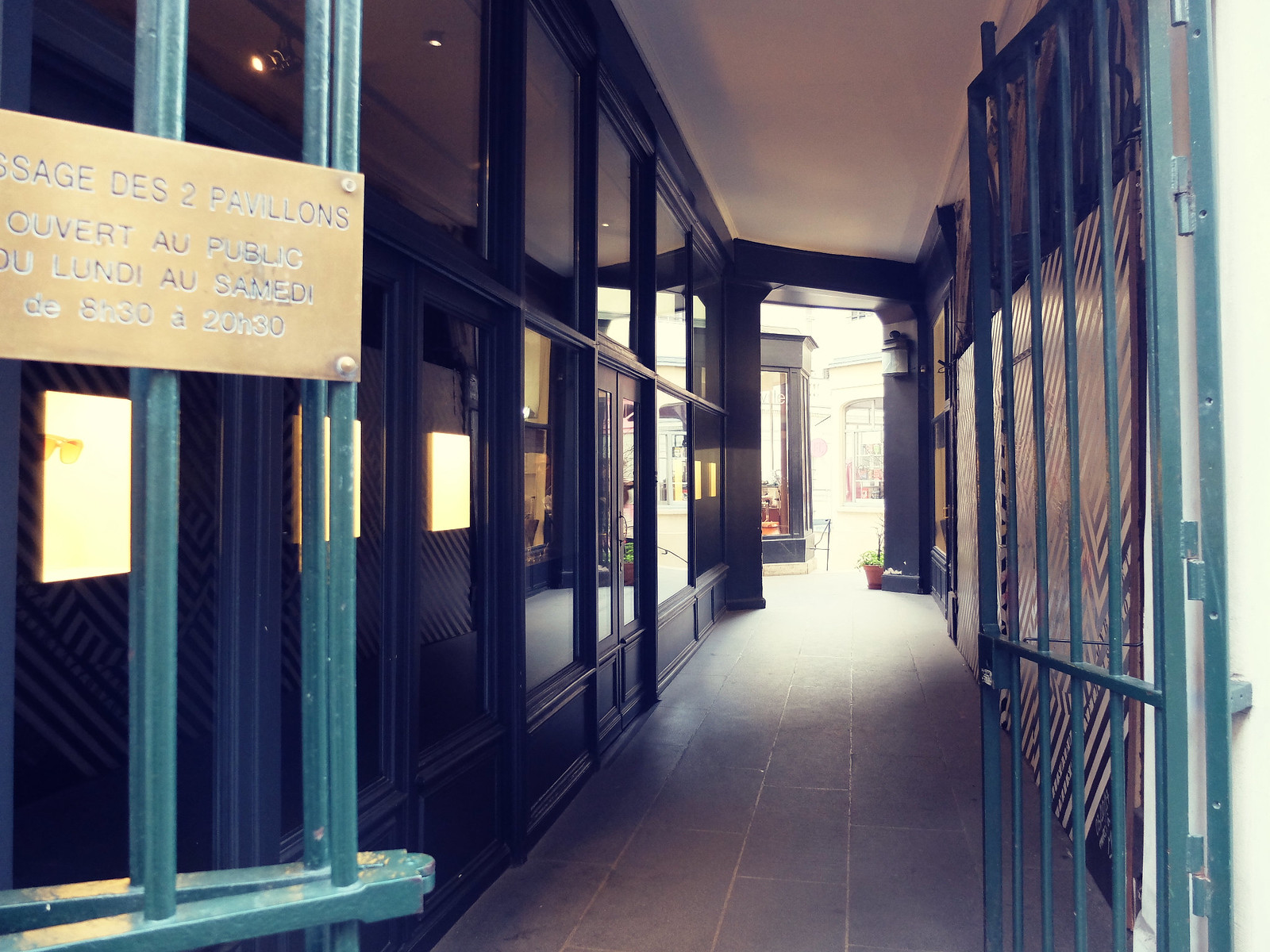 The 1st arrondissement has some nice cobbled streets around Les Halles… but the scenery is otherwise not so appealing with cheap crepe/kebab places and streetwear clothing shops, but drifting over towards the Opera district is the most adorable Passage des Deux Pavillons. The best way to approach it is along rue des Petits-Champs, unbeknownst to your amoureux… then suddenly veer into the passageway where you can steal a kiss. Built in 1820, it was one of the earliest passageways in the city. Carry on through the charming lane and down the steps which will take to you the location below.

While most people flock to the nearby Tuileries, the Gardens of the Palais Royal provide a more peaceful place for some cozy romancing. Formerly the private gardens of the residence of Louis XIII’s Prime Minister, le Cardinal Richelieu, the property was subsequently the Paris base of the Duke of Orleans, the Sun King’s little brother, who throw rather risqué parties here. This oh la la undertone carried on through the 18th century when a later Duke of Orleans rented out the buildings that encircle the garden leading to a rise in gambling halls, brothels and other evening establishments which turned the area into the evening hotspot at the turn of the Revolution. One could hardly imagine this given the tranquil ambiance that now reigns over the graceful gardens. Loose track of time with your sweetheart sitting in one of the park’s bench made for two, stroll hand-in-hand under the linden and chestnut trees, enjoy un petit café at one of the café terraces or take fun photos on the stripey Buren Columns found on the south end of the park.

The Louvre is most associated with the artwork displayed within its walls, making it easy to forget its former raison d’être as the palace of the French royals. The building, both inside and out, is truly spectaculaire and one of the most enchanting — and intimate — ways to experience this is by a stroll through La Cour Carrée at Night. Whisk your love under an archway leading into this square on the east side of the Cour Napoleon (where the Pyramid stands) and you’ll literally take their breath away. Beautifully lit at night, the golden hues, along with the serene atmosphere is magical. You can imagine you’ve been invited to a fancy gala with the royals as you cross the courtyard, perhaps stopping for some kisses in one of the nooks along the walls… or often to the sound of a busking classic musician. (Get your skip-the-line Louvre ticket here to save valuable time if you plan on visiting the inside of the museum.)

Most Romantic Restaurant that Won’t Break the Bank

A table in the spacious, airy and refined dining room of Maceo is the ideal setting for a posh date without costing a fortune thanks to their decently priced menus, available at both lunch and dinner (35 and 40 euros respectively) and including vegetarian options. Their creative contemporary menu includes seasonal dishes like beetroot with ashed chèvre cheese with an apple cider vinaigrette, scallops cooked in seaweed butter and nestled on a Jerusalem artichoke cream or roebuck with roasted peers. 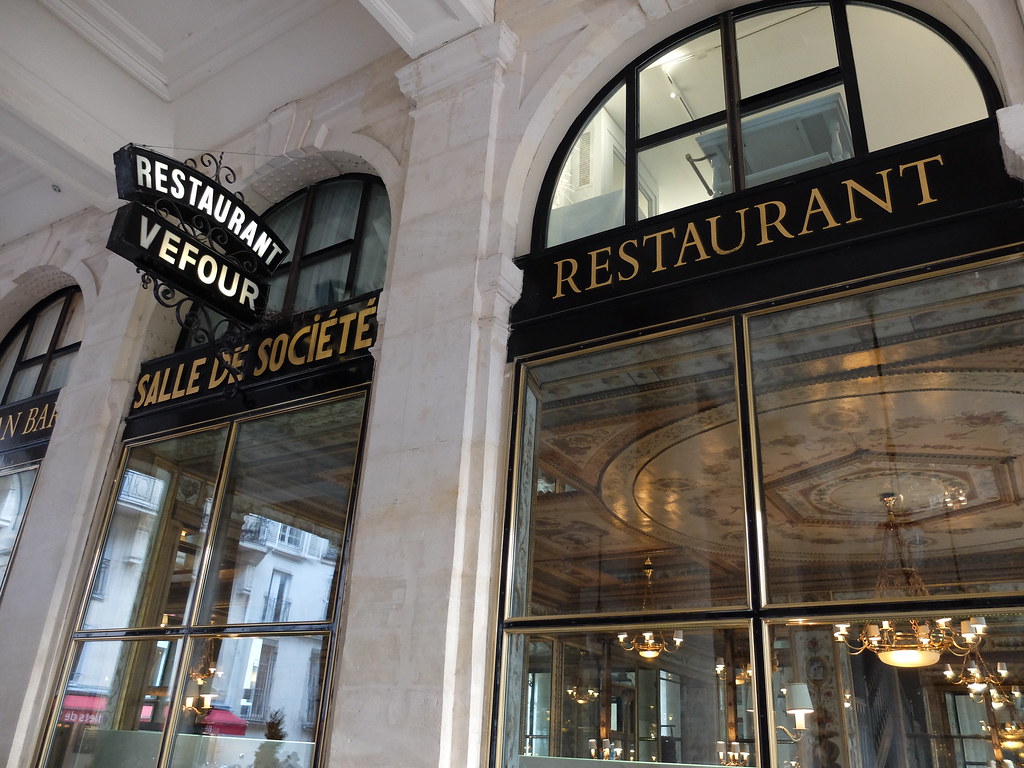 Most Romantic Restaurant that Will Break the Bank

Just behind Maceo and leading onto the stunning Palais Royal is one of the oldest gastronomic institutions in Paris. Dating back to 1784, the elegant dining rooms of Le Grand Véfour, with their delicate wall painting and stylish rend banquettes, have seen such illustrious as Napoléon and Joséphine Bonaparte, writers Victor Hugo and Colette and philosophers Jean-Paul Sartre and Simone de Beauvoir. More recently, it also featured Woody Allen’s movie Midnight in Paris. Its two-Michelin starred menu will tantalize your palate with the likes of duck liver terrine, celeriac and pear perfumed with Tonka beans and pomegranate juice, lobster sautéed in pumpkin stock and served with a “cappuccino” of reduced shellfish juice and roast lamb filet in a cacao crust. 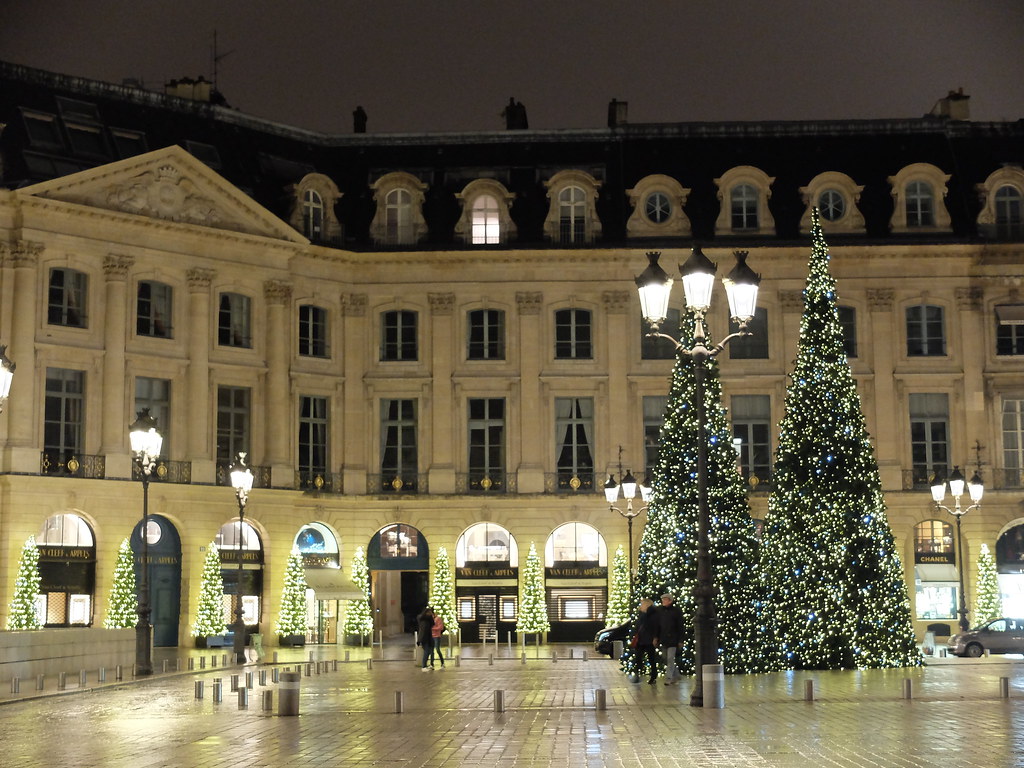 Most Romantic Place With “It All”

If there’s one place that has the most “wow factor” in the 1st district, it’s Place Vendôme. Commissioned by Louis XIV in 1702, his royal emblem of the sun is stamped around the refined square on the window ironwork, but then Napoleon left his mark a century later with his Roman-style column installed smack-dab in the center. Today, the gorgeous square is home to the city’s top jewelry shops (engagement ring shopping??) and the world-famous Ritz hotel, where you can treat yourselves to high tea or a cocktail at their Hemingway Bar for a royal price. That said, it’s completely free to surround yourself in the squares uber romantic ambiance.

Discover these spots on an amble around the district using this handy google map!

Our Collection of Romantic Paris Guides

Discover our full collection of romantic places, bars, restaurants and cafés in the city by subscribing to our new expanded ultimate guides to romantic Paris per arrondissement series as part of our “There’s Only One Paris” club! Every month a new guide! Learn more here.

You can also carry on your explorations of romantic paris with our other Romantic Paris top 10 mini-guides!

Great excursion ideas for those seeking an escape to nature from Paris (for HiP Paris).